Mark, Icon of an Era

In 1972, when Uncle Mark came to the Carrot Claim, his friends’ homestead in Southern Oregon, something in him breathed free for the first time. “Never,” he wrote in a letter home, “have I ever lived in such a wilderness.” His cabin, a 15-mile hike from the nearest road, was nestled in the woods beside a waterfall, and he spent the winter chopping wood for heat and drinking fresh water from the stream. “It is truly euphoric,” he wrote.

Mark Ingraham was one of many young people in the early ‘70s who chose to try their hand at living off the land. While the project was certainly nothing new—humans have been drawing sustenance from nature for as long as they have been in existence—it was understood by those who undertook it to be an act of rebellion against the machinery of the modern world.  When the earnest organizing and forward-thinking social movements of the 1960’s culminated in the 1968 assassinations of Martin Luther King and Robert Kennedy, and then the 1969 election of Richard Nixon, a grim sense of despair began to settle in among the nation’s left. The Vietnam War raged on unabated, despite the massive, nationwide protests calling for an end to the war, and poverty and social strife were widespread. Stokely Carmichael and Eldridge Cleaver went to Africa, the Weathermen went underground, and Timothy Leary went to prison. The kids were on their own. 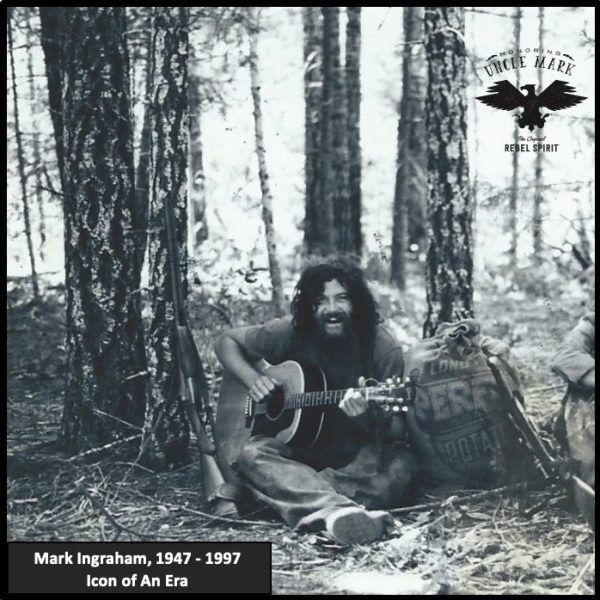 Disillusioned with their country’s political future, many young Americans decided to follow Henry David Thoreau’s example and declare their independence through self-reliance. With the motto, “Make Do with Less,” they studied the Whole Earth Catalog and Mother Earth News for tips on everything from building geo domes to canning peaches. As a 1975 New York Times article on the Back-to-Land movement put it, “The broad aim of the movement is to find ways to live simply but well on the land, outside the economic institutions that dominate the United States.”

Cannabis played an important role in this movement. Not only had the plant been a vital part of awakening the consciousness of their generation, it also offered one of the only ways for these young conscientious objectors to earn the cash they needed for tools, building supplies, and medical care. They lovingly cultivated their plants in hidden places far from the modern world, and sold them to those who were not fooled by American propaganda campaigns that had been targeting cannabis since the 1930s.

Uncle Mark was no exception. Coming of age in the 1960s taught him that there’s not always a correlation between what’s legal and what’s right. Besides, he had always been something of an outlaw. As a teenager he found himself on the wrong side of the law more than once, and he never showed much interest in success as it was defined by mainstream America. Freedom was what made him happiest, and he found it on mountain tops and by digging in the dirt. As he wrote, “It’s really very exciting knowing that you have yourself and yourself alone to keep you alive.” Over the years he channeled this passion into the majestic cannabis plants he cultivated in the remote places he loved.

The connection between cannabis and independence from the system was likely not lost on the U.S. government. As the New York Times article put it, “The movement is deeply antagonistic to the American economic system, whose adherents it sees as controlled by unbridled corporate power, corrupted with surfeit and crazed by an impulse to consume and throw away more and more, faster and faster.” Cannabis gave them the economic power to say no, and as long as the plants remained hidden in the backcountry, there wasn’t much the authorities could do about it. But in the late 1980s and early 1990s, infrared technology allowed planes to fly over the woods and detect the plants that had been secreted away, threatening a way of life for peace-loving cannabis growers everywhere. Uncle Mark, never one to back down from a fight, came up with a bold alternative: to grow cannabis alongside mainstream cash crops. He struck a deal with a farmer in Washington, who like most in rural America struggled to make a living wage on farming alone, to grow cannabis plants amidst the corn. The farmer got a generous cut, and for three years their healthy, symbiotic relationship allowed them all to thrive.

But the FBI, who had always excelled at keeping an eye on political dissidents, teamed up with the Spokane Regional Drug Task Force to bust the operation in 1992. Everyone involved was arrested, but Uncle Mark was the only one who refused to say a single word to incriminate anyone other than himself. For his trouble, he got the full ten-year sentence, though he would not live through more than half of it. Mark Ingraham died in prison in March of 1997 from cirrhosis of the liver, after being left alone to bleed out in his cell for hours. When his grieving sister came to the prison to collect his body and his belongings, she told the funeral director through her tears, “I know Mark came from the prison, but he wasn’t some terrible criminal. He was a marijuana grower. He was a gardener.”

When we took the name Rebel Spirit, we did so in honor of a man who understood freedom as something to be cultivated, not curtailed. Powerful men like FBI Director J. Edgar Hoover and President Richard Nixon thought of freedom as something that could be given and taken by the U.S. government, but Uncle Mark saw it differently. High up in the mountains, where the lives of such men were just specks in the distance, he could see the liberating force of the passing seasons and the ebb and flow of life and death. Today, cannabis is emerging from the shadows, and our reasons for cultivating it evolve as they remain the same: we honor Mark as we continue to rebel against the federal system that imprisoned him; we provide medicine and peace of mind to those who seek it; and we embrace the power of digging in the dirt.