Toking Terroir: Connecting Cannabis to The Web of Life 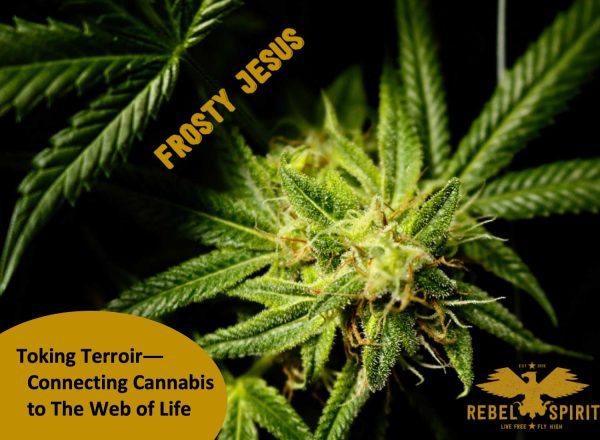 When we look at the world of industrial agriculture today, a category that includes large-scale non-organic cannabis grows, much of its destructive impact on the environment is a consequence of treating the natural world like a set of variables that can be isolated to maximize production. Instead of seeing healthy soil as a living thing, it is treated as inert material waiting to be injected with growth chemicals. When nitrogen was first isolated and discovered to be a powerful growth agent, it began getting added to the soil in extreme quantities. The desired result of an inflated crop is achieved without thought to the cost to the water table or long-term health of the soil.

The last few centuries of scientific discovery have led to astonishing advances in technology and human knowledge, but the world of scientific specialization has also tended to lead to a dangerously compartmentalized view of nature and our place within it. The advancements of the Age of Enlightenment can be directly connected with the advent of industrial agriculture. In the 19th century, for instance, British scientists used new discoveries in chemistry—not to mention their global trading monopolies—to begin extracting sodium nitrate from the Atacama Desert in Chile for fertilizer. Wealthy European industrialists utilized extractive mining practices with the express purpose of transforming the ancient farming practices of the countryside to mirror the mode of production used in factories.

But not every thinker at the dawn of modern science saw the natural world that way. Take Alexander Von Humboldt, for whom Humboldt County was named. Something of a rebel in the world of 19th century science, his observations of the Earth as a living organism profoundly changed the Western view of ecology. “Nature is a living whole,” he wrote, seeing that the great global chain of cause and effect bound all organisms together by a “net-like intricate fabric.” The beauty of growing things comes in part from the web that connects them. From the fertilization of living plants through the decomposition of dead matter, to the battle of wits between predator and prey, each function and element of nature is interwoven with all others, making it impossible to see any part of nature in isolation. Deserts, forests, oceans, even a single field or orchard, all are dazzling tableaus of interconnection that contribute to its spirit. In each place, the whole is greater than the sum of its parts.

In the French winemaking tradition, the spirit of a place is understood as living in every wine bottle, an ineffable quality referred to as terroir. The word terroir describes the sum total of every aspect of the site where the wine was made—the slope of the hills, the consistency of the soil, and its exposure to the sun and wind. Though the same type of grape might be planted in vineyards 100 yards apart, the wine they yield might be completely different. The concept of terroir is based on the understanding of nature as a living whole; it is an umbrella under which every single element of the ecosystem and acreage of the vineyard exists as a variable that contributes to taste.

Since cannabis plants are just as sensitive to ecological variation as grapes, many of the industry’s best growers are incorporating the concept of terroir into their cultivation practices. Given seeds or even clones from the same strain, different growers are unlikely to produce the exact same product. The experience of smoking flower from the hills and valleys of California will have subtle distinctions from its counterparts grown in coastal Oregon. Like an artist and their masterpiece, the environment adds its signature to the strain’s genetics. Thus Rebel Spirit growers must match the best of their proprietary strains to the region in which they’ll be grown. Our Thunderbird Rose of Oregon will grow and taste differently in California, perhaps prompting the cultivator to grow Rebel Berry OG in California instead. As Rebel Spirit expands to other states, we will be working to pair geography, climate, soil and cultivation methods with the best strains for each region.

Rebel Spirit is a company with as deep a commitment to place as any family winery. The terroir of our premium flower owes its nuanced character to Oregon’s Willamette Valley. Its fertile fields are held by the breathtaking Cascade mountains on one side, and the forested slopes of the coastal range on the other with the Willamette River flowing in between. Our plants are sustained by Oregon’s plentiful rainfall and the farm’s underground aquifer. The region’s flourishing soil is the ancestral home of the grassy oak savannas where native people gathered berries and roots, and has sustained a century and a half of American farmers. We are proud to say that soil now nurtures our premium cannabis strains, whose every bud reflects the delicate terroir unique to Uncle Mark’s Farm.

PrevPreviousTHC% vs. The High as A Whole
NextDelta 8: Pandora’s Box of The Cannabis IndustryNext